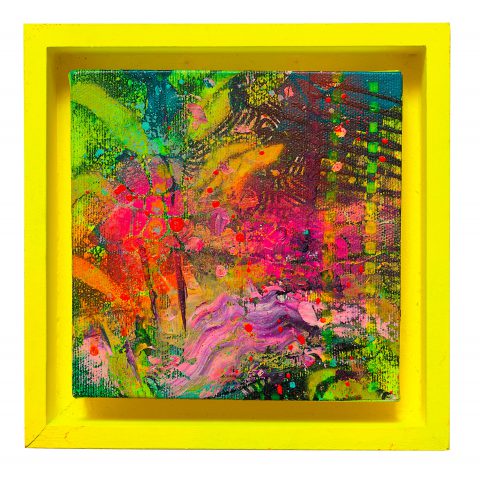 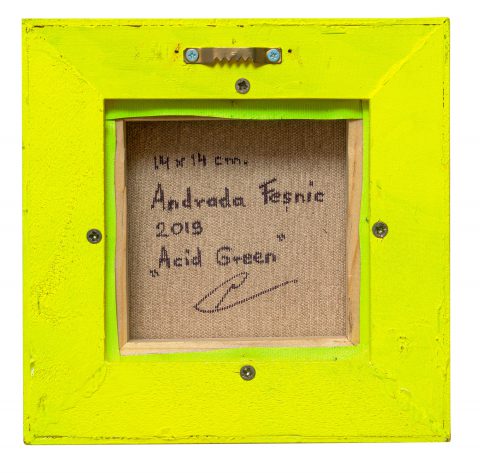 Born in 1987 in Cluj-Napoca, Romania, where she lives and works. She studied Painting at the University of Art and Design in Cluj-Napoca, where she earned her BA in 2016 and her MA in 2018. In 2015 she won a scholarship at Central Saint Martins, University of the Arts London. The art-makers community Centrul de Interes in Cluj- Napoca housed the artist’s solo exhibition Aftermath in 2018, in A+ Project Space. She presented her works in a series of group exhibitions and international projects, including Performing the Unconscious, Freud Museum, London, 2015, during her scholarship at the University of the Arts London. In 2019 she presented her first solo exhibition abroad, Fractured Realities II, at the Estopia Art Gallery, in Lugano, Switzerland, which previously had presented her solo show Fractured Realities I, in Bucharest.
For Andrada Feșnic, painting is a true experimental field where the overlapping of layers, the collage painterly effect and the carefully orchestrated decomposition of figurative elements de ne an artistic pro le visually marked by the School of Cluj, where the artist comes from, doubled by a highly innovative personal direction. Cut-outs of reality, or rather jigsaw puzzles that seem to be missing enigmatic pieces: Andrada Feșnic’s canvases invite the viewer into a complicated labyrinth of overlapping realities. Reality, Andrada Feșnic believes, is not under the dome of a single truth, and the artist has a duty to simply suggest the tracks the viewer should take, without any predetermined direction. Inner landscapes or spaces of co-existence of memory, dream, utopia, the absurd and what we conventionally call reality: such are the works by Andrada Feșnic.