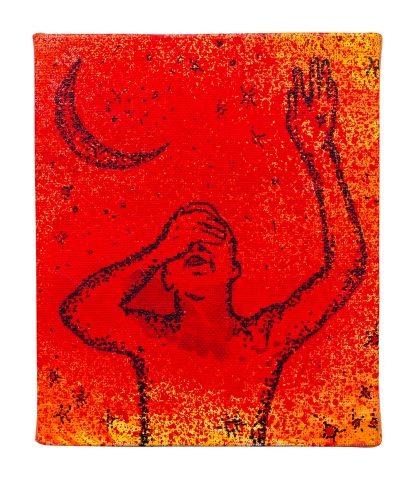 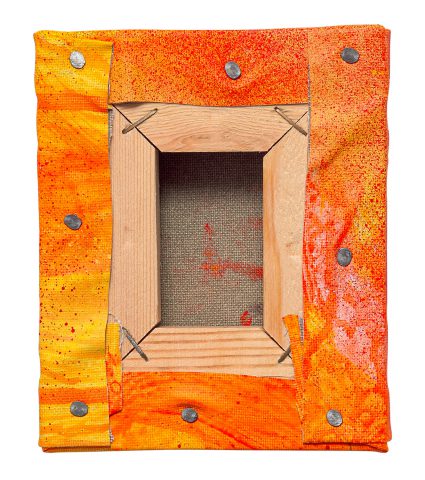 Born in 1983 in Mazouna in the region of Sidi Bouzid, Tunisia. Nurtured in the popular narrative, his childhood was moulded by the imagination of the rural environment where the tradition of folk tales and poetry flourished. His studies at the Higher Institute of Fine Arts in Tunis allowed him to crystallize this literary and intellectual heritage into a singular artistic practice. A practice whose genesis opens through writing and draws its resources from its texts, sometimes poetic or literary, sometimes memorial or improvised.
The daily writing exercise, while it delimits, extends the horizons of its physical universe. Not far from free guration, the artist questions the relationship between the real and the imaginary through the dramatization of the constellated image. Images of memory, of a reality taken from everyday media, intersect in a pictorial eld where, on the surface of a picture, the rustling of a dialogue begins without end, not for the narrative of a fact, but for a festival of narrative.
Selected exhibitions
2019 1-54 Contemporary African Art Fair, Marrakech, Morocco
2018 Dak’Art – Biennale de l’art africain contemporain, Dakar
2018 1-54 Contemporary African Art Fair, London
2017 RMB Turbine Art Fair, Illovo, South Africa
2017 Art Paris Art Fair, Paris
2017 AKAA – Also Known As Africa Art Fair, Paris